The choir's name is the old Cornish name for the village of Flushing . As many of the members lived in the village it was decided that Flushing should be where the choir was based. 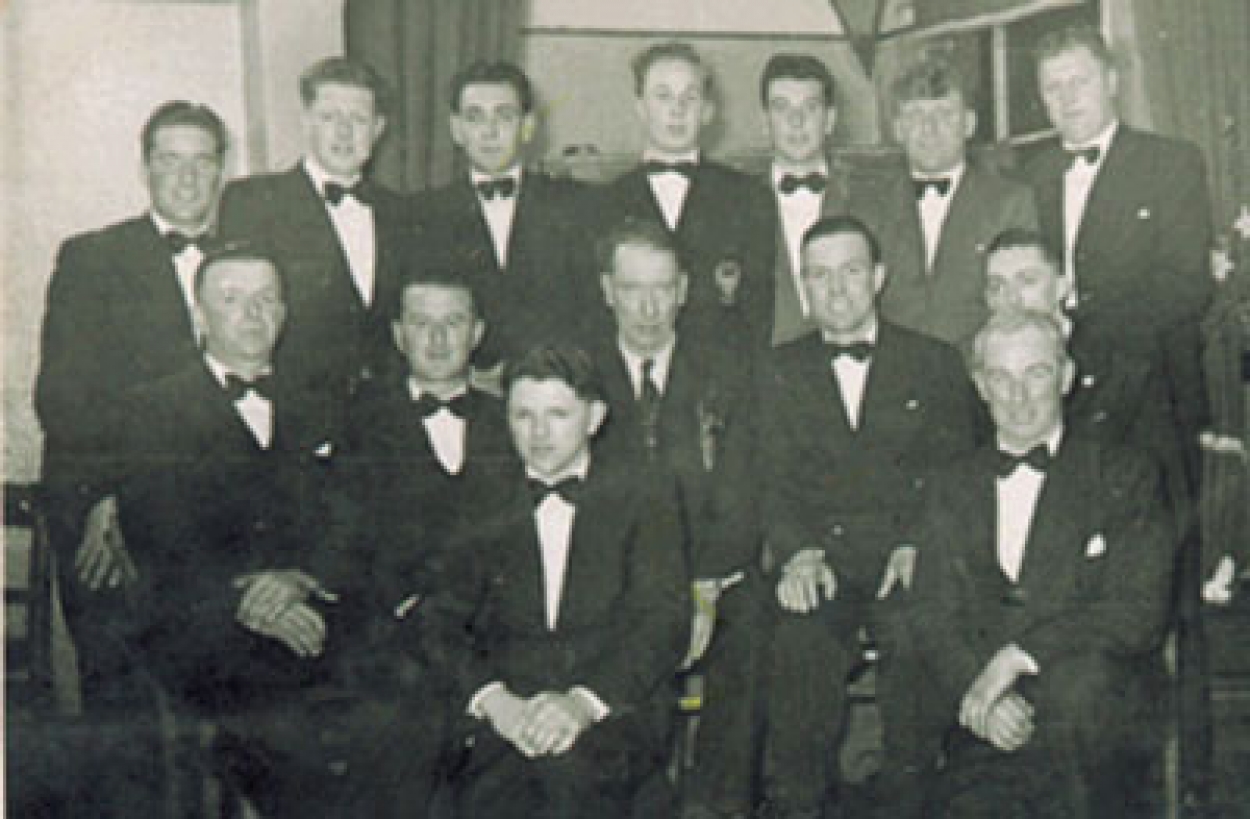 Nankersey Male Voice Choir has come a long way since their first concert at Flushing Primitive Methodist Chapel in 1950, but throughout the years, they have held true to their Choir Motto "to sing for and to give pleasure". Translated into Cornish it is"Can ha ry lowender."

The twelve original members were: 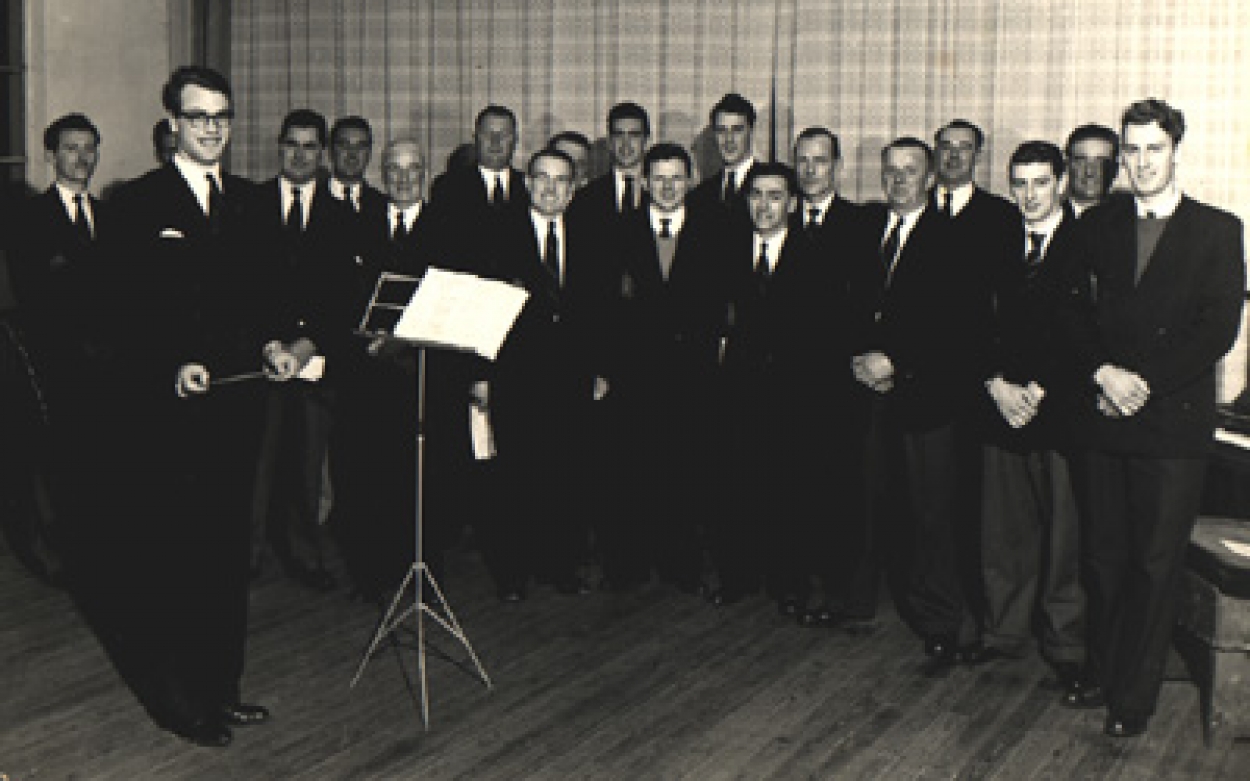 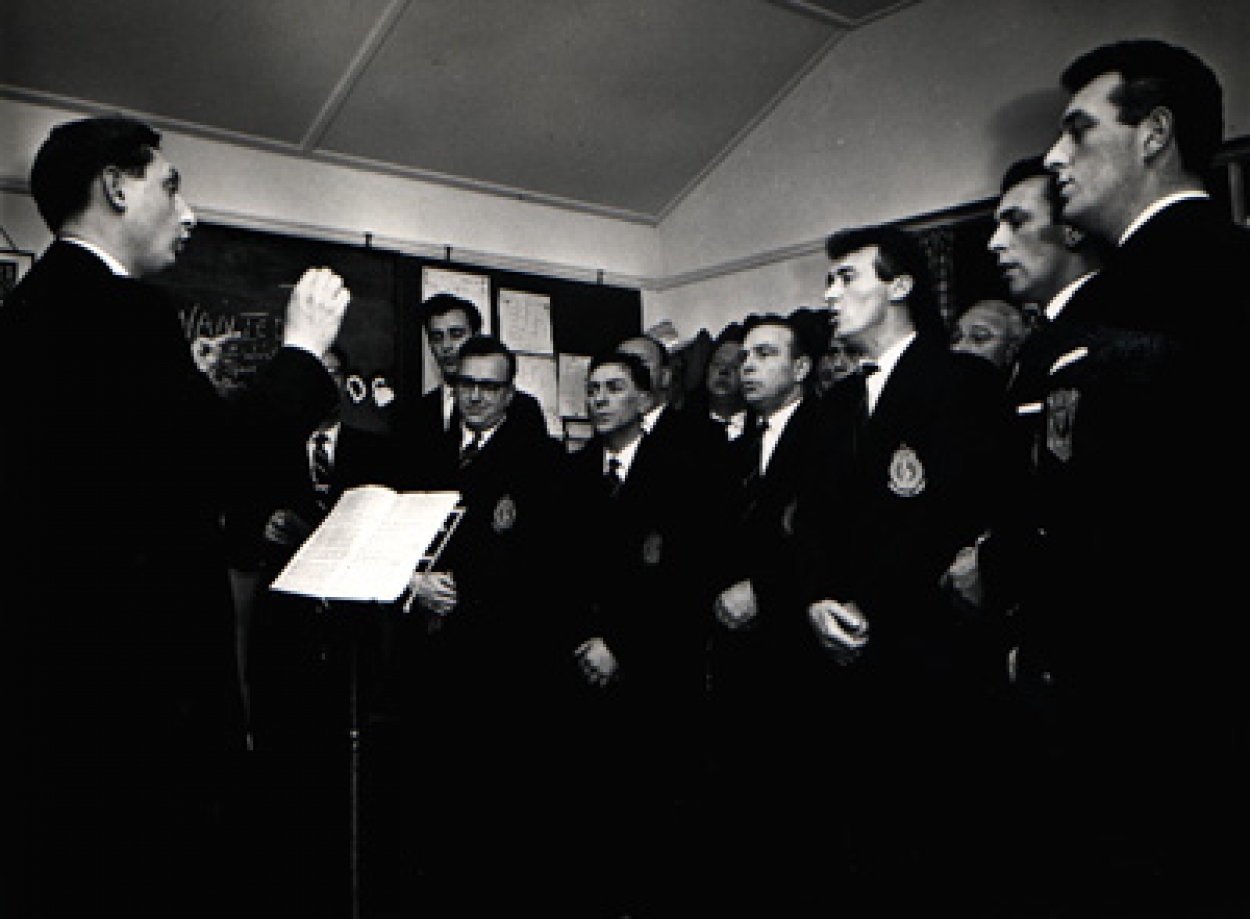 The choir's name is the old Cornish name for the village of Flushing . As many of the members lived in the village it was decided that Flushing should be where the choir was based.

However Flushing's location, on the opposite side of the harbour to the town of Falmouth , sometimes provided more than a few problems for members from 'across the water'. The only public transport to Flushing in the early days was by a ferryboat, which finished at 7 pm . After that time it was by rowing boat, which on a dark and stormy night could be very hazardous.

Older members quite clearly remember standing on Flushing Quay for half an hour or more, shouting 'Over' to the boatman who was waiting for passengers on Falmouth's Greenbank quay, or possibly in the bar of the Greenbank Hotel! 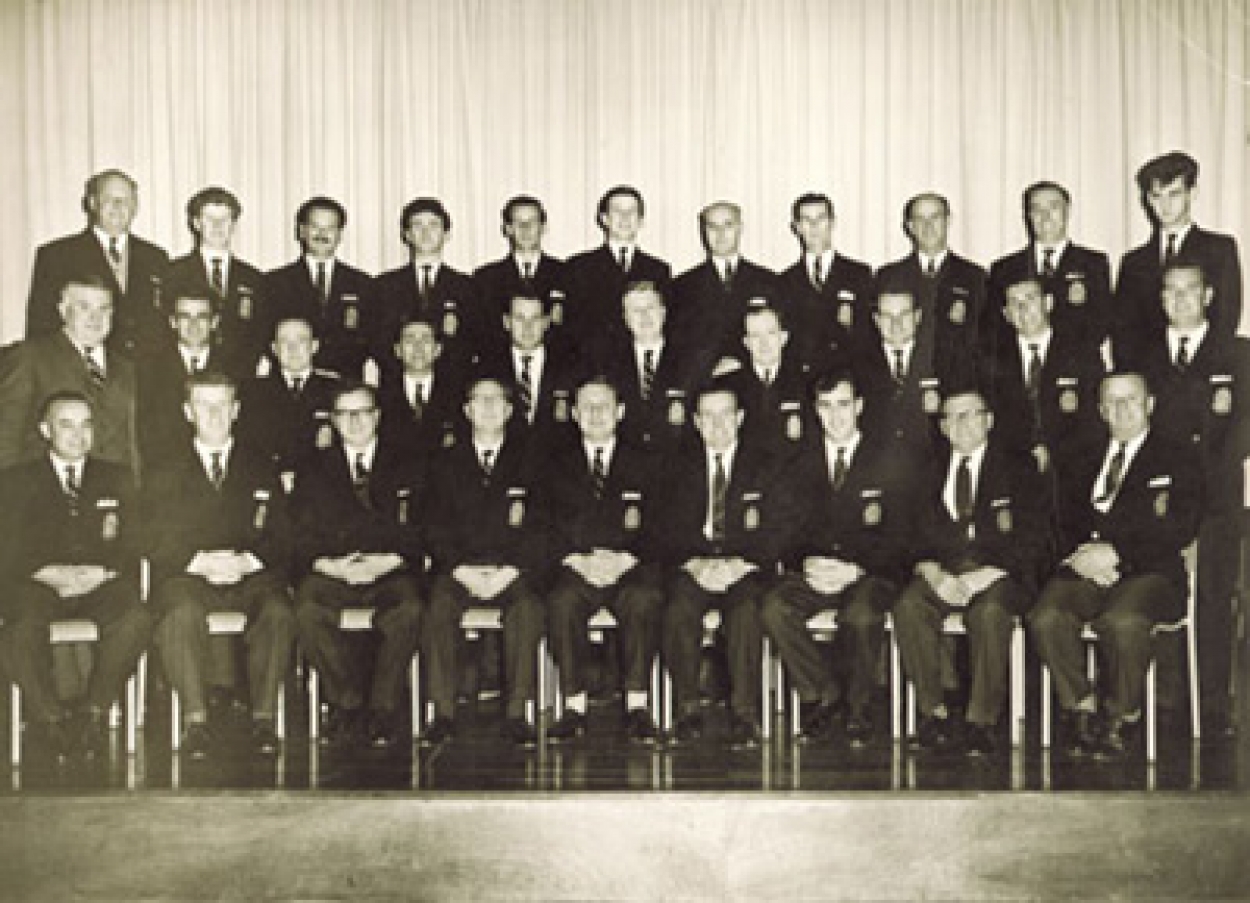 The choir's original Conductor was Harry Owen, a renowned bass soloist who was the Conductor of the Flushing Male Voice Choir in the 1930s and for many years conducted the Falmouth Docks Christmas Choir. In those early days the choir had no accompanist, so to get the note a 'pitch pipe' was often used. As word of the choir spread, Harry Dower stepped forward as accompanist and this arrangement lasted for a number of years.

In the mid 1950s both Mr Owen and Mr Dower retired leading to the appointment of David Eastburn, who, aged only 19, must surely be one of the youngest conductors ever. The choir also had no trouble finding a replacement accompanist, Noel Ashton, who went on to play a large part in the Choir's affairs for the next twenty-five years. However after five years, David left to return to college and Noel took his place, with Harry Francis becoming accompanist.

In 1963, with Nankersey's success steadily growing, it was decided to appoint a Choir President on a yearly basis. The first member to be honoured was a founder member, the late Ronald Laity. 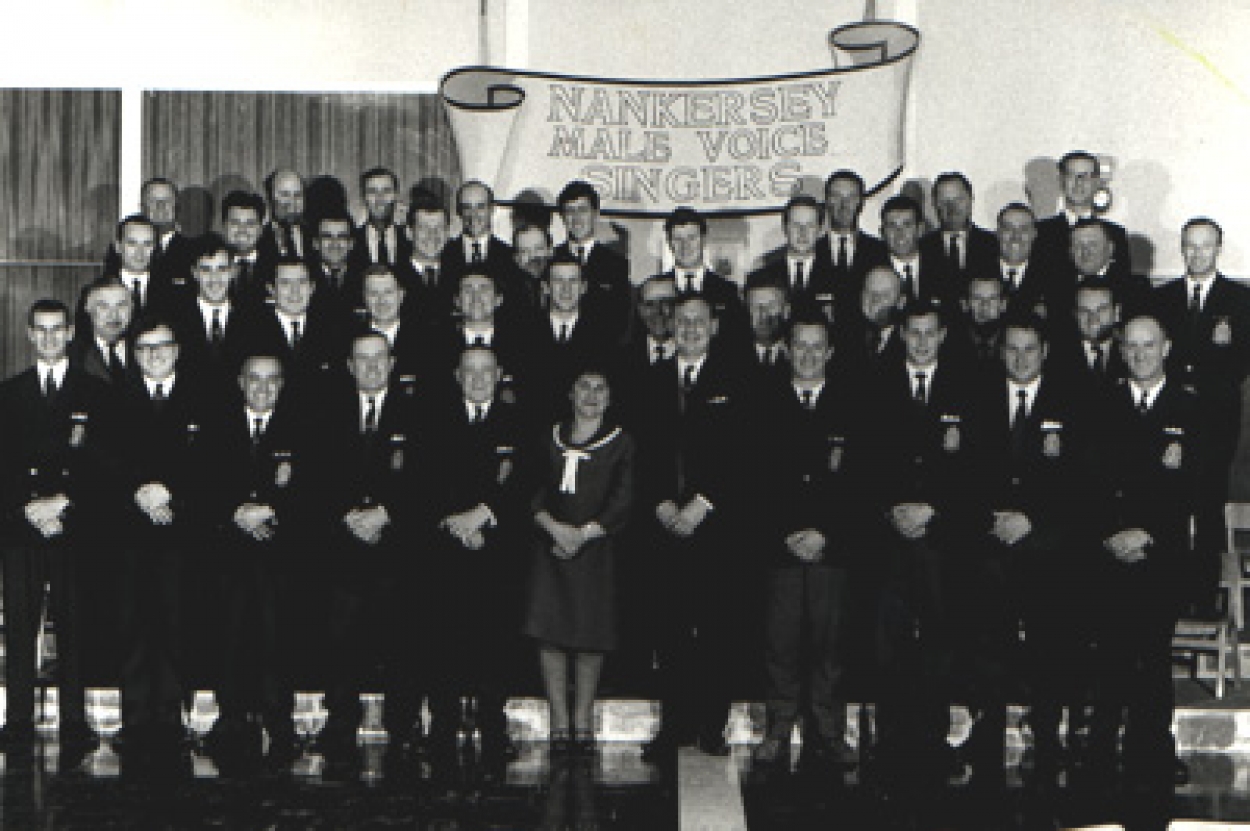 In 1966, the choir began its association with Falmouth 's Princess Pavilion, performing 270 concerts in seventeen seasons. The following year, Margaret Howard joined the Choir as assistant accompanist to Ven Collins. When Ven left to become Organist and Choirmaster at the Falmouth Methodist Church , Margaret became the choir's first female accompanist, quickly endearing herself to both choir members and guest artistes alike.

Noel Ashton continued in office as Musical Director until 1987 when he and his wife Caroline emigrated to America . Later the same year, the choir was also sad to see the departure of Margaret, although her replacement, Elaine Tangye, proved to be another highly talented accompanist.

In 1998, the Choir was invited to sing in the Daily Mail Pavilion at the Hampton Court Palace Flower Show, and the same summer, also played a key role in the celebrations of the Tall Ships Race from Falmouth . Later in the year, Elaine took over from Denman as Musical Director and Jane Wernham was appointed accompanist.

In 1999, the Choir participated in a short film by Wild West Films called Wind , which has been shown at a number of international film festivals and on Carlton television.

In early 2000, Jane was forced to leave the choir due to ill health. 2000 was Nankersey's 50 th Anniversary year, and a celebratory CD and cassette was issued, the first recording the choir had released under the musical direction of Elaine Tangye. The recording is a glorious collection of both old and new choir favourites that truly represent 50 Golden Years . The accompanists on the recording are Jane Wernham, Clive Ellison and Simon Jacobs.

Since 2000, Nankersey have been fortunate in acquiring the services of Accompanist George Smith.
Following the sad passing of George in 2014 , Michael Uren became the current Choir Accompanist. 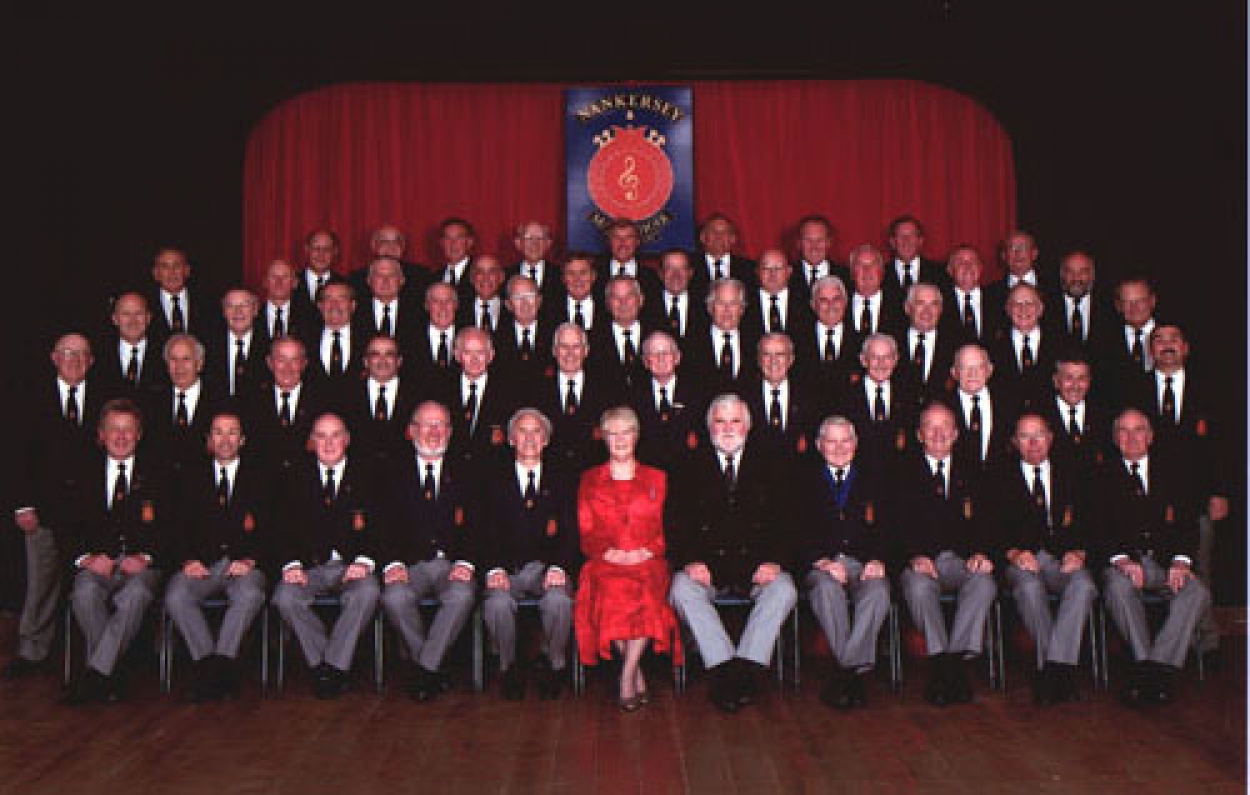 At the 2002 Camborne Music Festival, Nankersey received the Ewart Kinsman Challenge Cup in the Advanced Male Voice Choir class, whilst Elaine received the Special Award of the Bob and Eileen Gilbert Perpetual Baton.

In March 2003, Nankersey won the Open Class for Male Voice Choirs at the Cornwall Music Festival and awarded the Heathcoat Cup.

In May 2003, the first-ever British Male Voice Choir Festival was held in Cornwall with forty-eight choirs taking part, including eight from continental Europe . Nankersey participated in a Gala Concert in Richmond Chapel, Penzance with the Bela Bartok Male Voice Choir from Pecs , Hungary , Rhos Male Voice Choir from Wales and Marazion Apollo. Nankersey also took part in the festival competition for choirs of over 40 singers. Again, in both 2005 and 2007 Nankersey Male Choir took part in the Cornwall International Male Voice Choral Festivals with events held throughout the whole of Cornwall in the form of Regional Galas. In May 2007 the choir also took part in the Festival Competition for choirs of over 40 members, held at the Hall for Cornwall.
Since then Nankersey has participated in every biennial Cornwall International Male Choral Festival , hosting choirs from all parts of the United Kingdom and the rest of the world.

The choir have been featured on Songs of Praise , and also on the late Sir Harry Secombe's programme Highway . The choir has also participated in the massed Cornish Male Voice Choirs concerts at the Royal Albert Hall.

Today, Nankersey Male Choir is well known, not only throughout Cornwall , but also across the UK. Their popularity draws capacity audiences enabling them to raise many thousands of pounds for various charities. The choir has bucked the trend in male voice singing in Cornwall ( and elsewhere) and grown steadily over the years. Membership as at the beginning of 2010 was 65 members. A policy of active recruitment by means of "Open Evenings" has been and continues to be highly successful. Great credit for this growth must be attributed to the superb reputations of the Musical Director and Accompanist. New members are always made very welcome and the choir prides itself on its "family" spirit.

2010 Nankersey Choir - Photo by Will Bunce 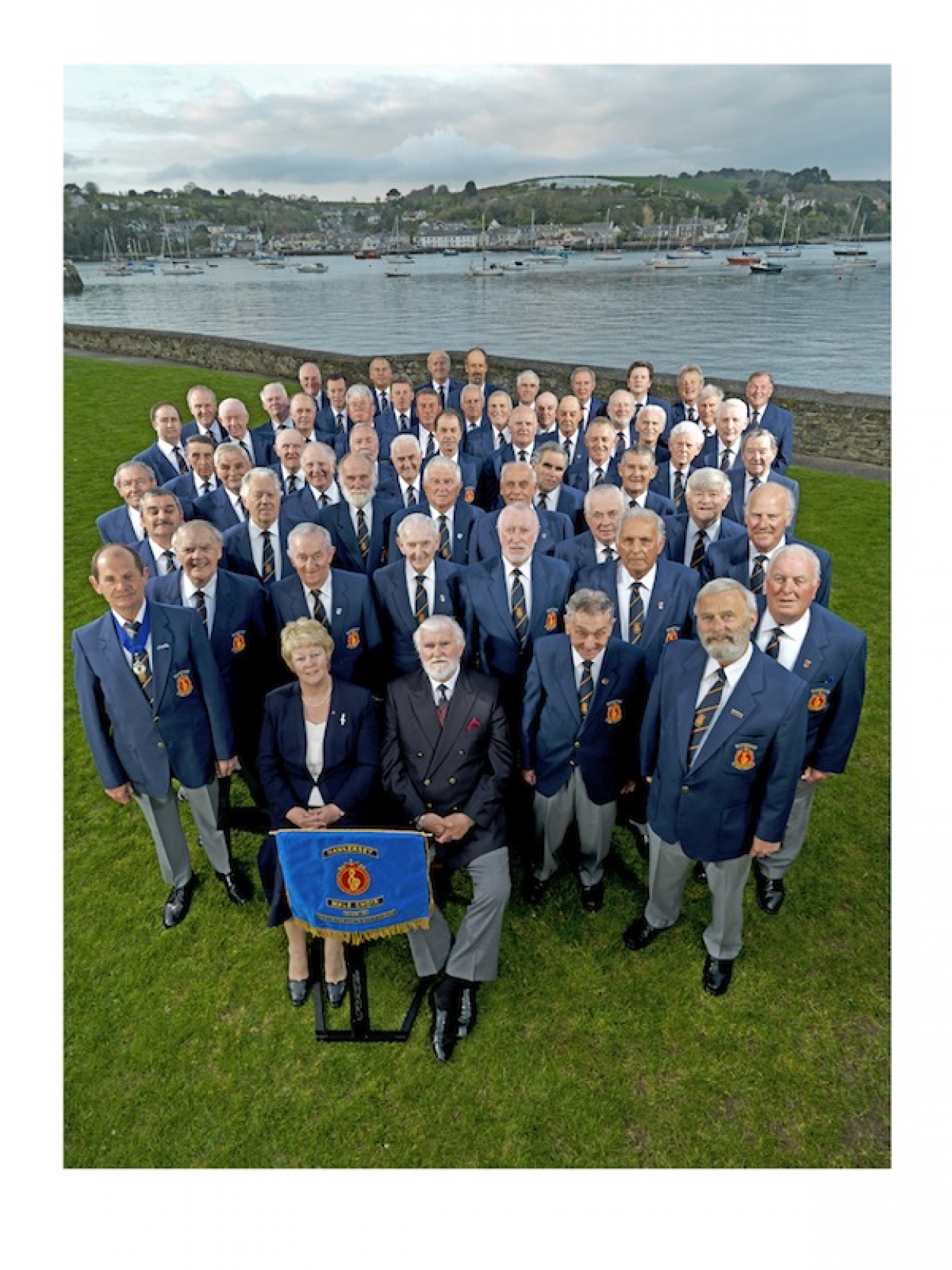 Keen to help a photography student at the University (Will Bunce), the choir was rewarded with 2 photos taken by Will:- 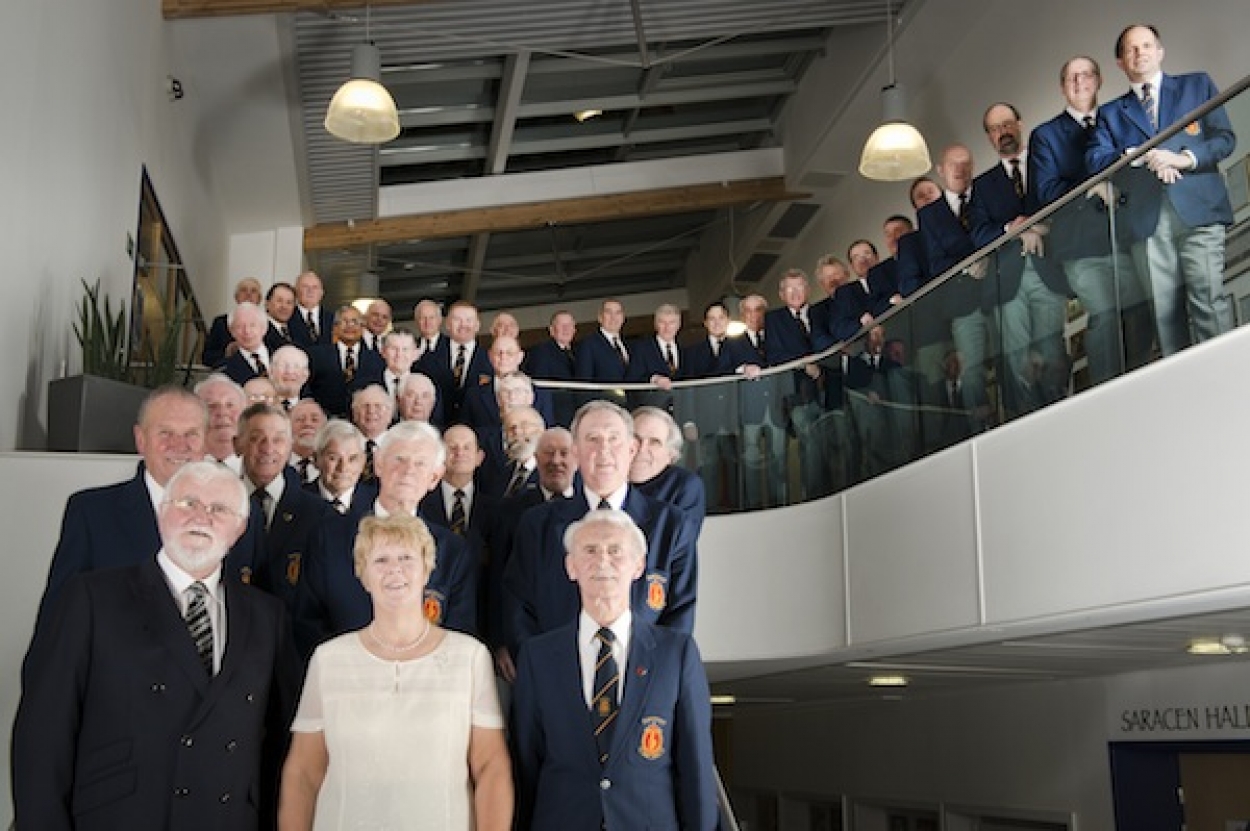 A more informal type photograph was called for the Royal Albert Hall programme (November 2013) and again the University helped out with 2 photos taken at Penryn College.
2019
At the beginning of the year ,our membership was 52 Choristers.